can be a profound and transformative experience for a woman. It is a time of great excitement and joy, tempered by exhaustion and self-doubt.

For many women, birth and the early months of parenting are a shock for which nothing they have previously learned can prepare them.

And as children grow, so do the challenges.

Being Mummy gives an honest voice to the full spectrum of feelings common to many mothers, never losing sight of the sheer delight that children bring. The book’s simple words and candid images celebrate the everyday love between mothers and their children.

Available in Australian and New Zealand bookshops (Email me to buy direct.)

Anne Manne
Author of Motherhood, How should we care for our children? Allen & Unwin, 2005

Ralph Waldo Emerson once wrote that, “In dealing with my child, my Latin and Greek, my accomplishments and my money stead me nothing; but as much soul as I have avails.”

Being Mummy is one woman’s journey as she discovers just such a truth. In this evocative book, Taplin captures the exhilarating roller coaster ride of early motherhood. Taplin’s delicate prose captures the enchantment of feelings of overwhelming love. Yet she does not sentimentalise or idealise motherhood. She writes about a mother’s disenchantment too, of exhaustion and of never having a moment alone, of wondering where her old life has gone.

Taplin’s words are accompanied by some truly superb photography. Together they are achingly beautiful, illuminating the poetry of the everyday; the intimacy of breast-feeding, a tiny hand in ours, a small head nestled on a breast. But they also reveal fatigue, isolation and moments of alienation. Mothers can feel exhilarated by the joy in the presence of this small human being they have brought into the world, but also overwhelmed by responsibility for them. Taplin says about motherhood ‘There is no ‘safe zone’ …having a child means being forever vulnerable to pain.’ Mothering is hard work, not just physically, but emotionally. It calls out of us reserves of energy and responsiveness most of us never knew we had.

Being Mummy is a moving tribute to the ways we are changed profoundly on becoming mothers, as our sense of self expands to include not just any other, but a precious child. In Taplin’s spare and sensitive prose, mothers will recognise themselves.

Being Mummy is a reflection on life with small children – the everyday ups, downs and frustrations but overwhelmingly the joy and ‘catch in the throat’ love that mothers and indeed all parents experience. It is a celebration of motherhood.

In a time when many Australian parents are unable to spend as much time as they would like with their babies and older children, due to increasing work pressures, it is up to all of us – and especially decision-makers – to make it easier for parents to juggle their work and parenting arrangements so they can enjoy the special early years of their children’s lives.

Being Mummy is a beautiful reminder to cherish the challenging and wondrous times in parenting each day. 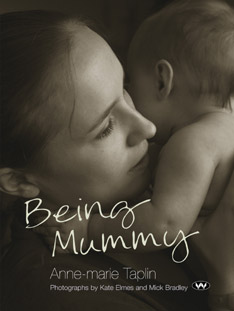 Read more about it (PDF)

Your feedback - tell me what you think!

May 2007
Being Mummy photos, Advertiser shoot

“A gender-equal society would be one where the word ‘gender’ does not exist: where everyone can be themselves.”*

I’ve always been aware of gender conditioning and actively tried to combat any lingering prejudices or stereotypes in my own parenting, even down to encouraging dolls with my boys when they were little. It’s great to read people writing about gender issues they’re experiencing with their kids. For too long these subjects have been discouraged or silenced. I’d love to publish some more creative writing on this topic, especially if you are struggling with a child who actively tries to move away from gender normative preferences. A society where everyone can be themselves  thanks Gloria for those aspirational words.